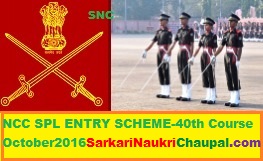 Age Limit. For NCC candidates (including wards of Battle Casualties) 19 to 25 years(born not earlier than 02 Jul 91 and not later than 01 Jul 97)

(i) Educational Qualification. (aa) Degree of a recognized University or equivalent with aggregate of minimum 50% marks taking into account marks of all the years. (ab) Those studying in final year are also allowed to apply provided they have secured minimum 50% aggregate marks in the first two/three years. Such students will need to secure overall aggregate of minimum 50% marks if selected in interview failing which their candidature will be cancelled. The candidates studying in the final year of graduation should complete their examinations related to the degree, like, written, practicals, viva-voce, projects backlogs etc prior to 01 Oct 2016. They should be able to produce the degree within 12 weeks from the date of commencement of training at OTA, Chennai. Such candidates will be inducted for training at OTA, Chennai on additional bond basis for recovery of the cost of training as notified from time to time as well as stipend and pay and allowances paid, in case they fail to produce the requisite degree certificate. Candidate should attach self attested photocopies of the certificate of 10th class for proof of age, Degree with all years/semesters marks sheets and NCC ‘C’ Certificate. Candidate should also attach certificate with their applications regarding CGPA converted to aggregate percentage of marks as per university rules from their institutes.

(ii) Service in NCC. Should have served for minimum two academic years in the senior Division/ Wing of NCC.

(iii) Grading. Should have obtained minimum of ‘B’ Grade in ‘C’ Certificate Exam of NCC.


(b)For Ward of Battle Casualties of Army Personnel Only.
(i) Educational Qualification. Degree of a recognized University or equivalent with aggregate of minimum 50% marks taking into account marks of all the years.
(ii) NCC ‘C’ certificate not required.
(iii) Applicants under category of Wards of Battle Casualties to send their applications direct to Directorate General of Recruiting/ Rtg-A, NCC Entry, AG’s Branch, IHQ of MoD (Army)’ West Block-III, R.K. Puram, New Delhi-110066.
(iv) Eligibility for wards of battle casualties and also document to be attached alongwith the application form are as under.
(aa) A letter to the effect that the parent has been killed/wounded / reported missing in action issued by MP Dte/Respective Regimental Records and a copy of Part II Order notifying injuries and being classified as battle casualties in case of serving/medically boarded out pers.
(ab) The vacancies under wards of battle casualties are available to wards (sons and daughters including legally adopted) of battle casualties specified as
(aaa) Killed in action.
(aab) Died of wound or injuries (Other than self-inflicted)
(aac) Wounded or Injured (Other than self-inflicted).
(aad) Missing
Permanent Body Tattoos.Permanent body tattoos are only permitted on inner face of forearm, ie. from inside of elbow to the wrist and on the reverse side of palm/back(dorsal) side of hand. Permanent body tattoos on any other part of the body are not acceptable and candidates will be barred from further selection.Tribes with tattoos mark on the face or body as per their existing custom and traditions will be permitted on a case to case basis.

The last date for receipt of applications is as under:-

How to Apply:-
(a) Apply on plain paper as per the format available at Official website of Rtg Dte www.joinindianarmy.nic.in(Downloads), duly typed.

(b) Applications should be posted to the nearest OC, NCC Unit from where NCC ‘C’ certificate has been issued.

Kindly go through the official  notification for any doubt or clarification.
Posted by SNC at 07:37 No comments:

IMA Passing Out Parade December 2015: 469 Cadets Inducted Into The Indian Army As Officers


The historic and imposing Chetwode Building of the Indian Military Academy (IMA) was the perfect backdrop to the spellbinding passing out parade of 519 gentlemen cadets of the 137 Regular and 120th Training Graduate (TG) Courses, who were the cynosure of all eyes on Saturday morning. While 469 of the cadets were commissioned in the Indian army, fifty were foreign cadets from countries like Afghanistan, Bhutan, Maldives, Nepal, Mauritius, Seychelles and Sri Lanka.

Over 2,000 people had gathered at the venue much before the parade began. The last night drizzle had made the air nippy and there was a distinct chill which however slowly dispersed as the sun came out.

For most people though, their eyes were riveted on the majestic Chetwode Building named after Philip Chetwode, commander-in-chief of Indian forces who delivered a stirring address at the inauguration of the academy in 1932, a part of which has now become the IMA credo. Even before the parade started, the audience could hear the loud roar of the cadets, practicing at the far end of the academy.

The parade began soon after the arrival of the reviewing officer, army chief, General Dalbir Singh, who arrived on a four-horse carriage, originally belonging to the Maharaja of Patiala, which was gifted by the erstwhile royal family to the academy.

Speaking on the occasion, Gen Singh, said that he was transported back in time to 42 years ago, when as a gentleman cadet, he had participated in a similar passing out parade while graduating from the academy. “This is a very important day in your lives as you join the Indian Army and take the pledge of serving the country,” the Army chief said, advising the cadets to “lead by example.” He also quoted from the IMA credo to emphasize the responsibility which each officer had: “The safety, honour and welfare of your country come first, always and every time. The honour, welfare and comfort of the men you command come next. Your own ease, comfort and safety come last, always and every time.”

The majestic parade came to an end after each of the cadets had taken the ‘antim pag’, the final step inside the Chetwode Building symbolising their induction as officers in the Indian Army. A highlight of the parade was the fly past of three choppers that dropped flowers on the venue from the air which lent a festive touch to the entire atmosphere.
Although the reviewing officer changes every year, there are some aspects of the parade which are standard and are looked forward to by all the attendees. Amongst them, the helicopter fly past with the showering of petals on the cadets as they move towards the 'antim pag' and again a fly past with the flags of army, navy and air force, as the last cadet takes the final step, are moments that are etched in the minds of visitors.
So far IMA has trained 57854 officers 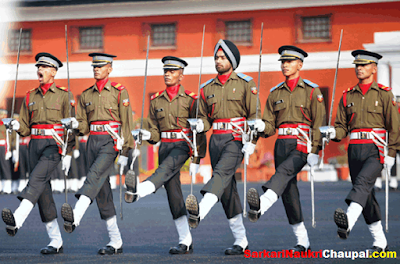 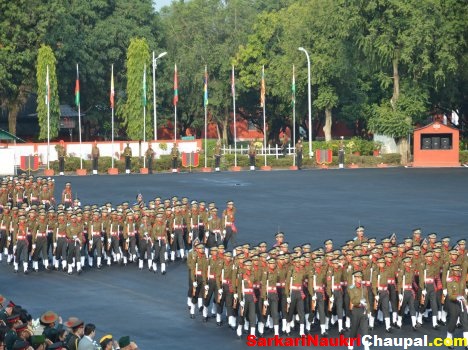 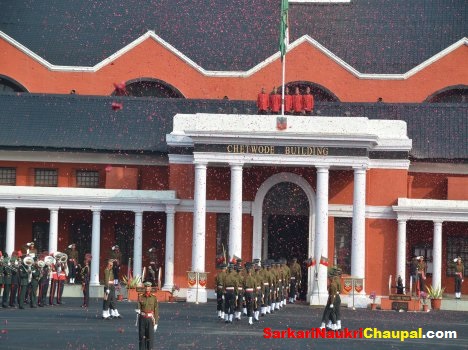 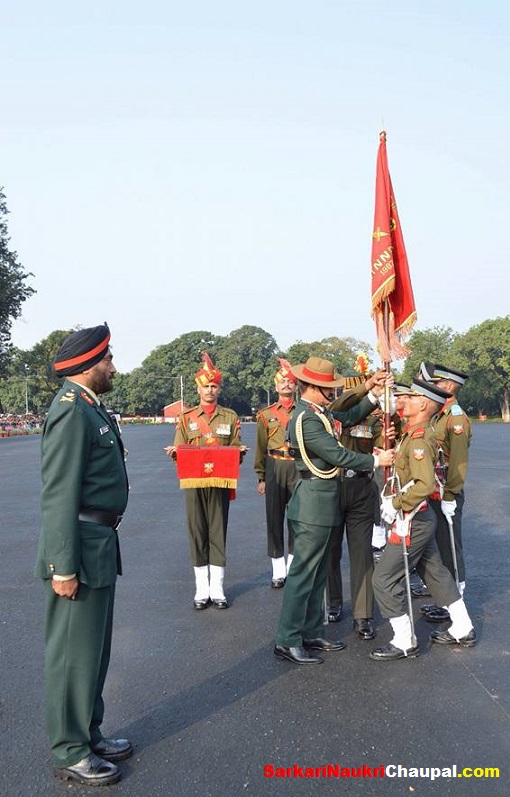 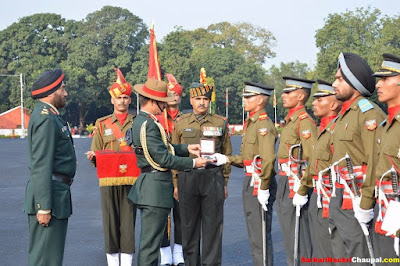 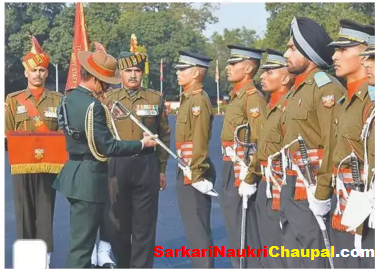 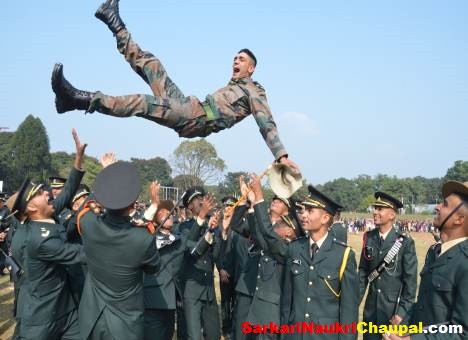 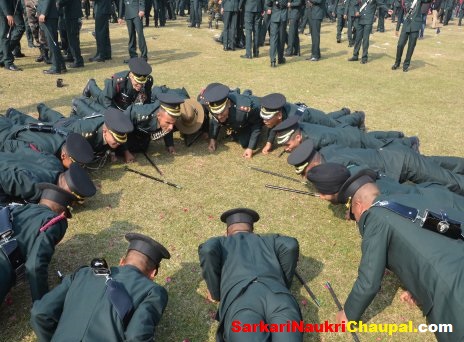 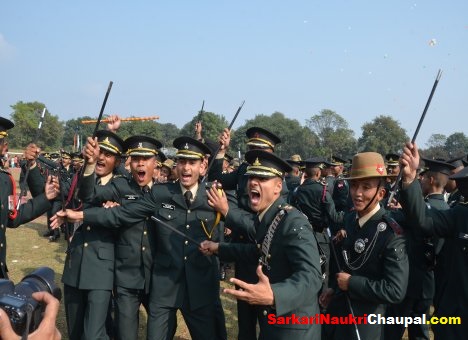 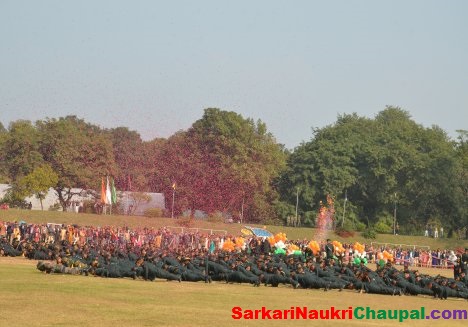 With 74 cadets commissioned as officers into the Indian Army, Uttar Pradesh tops the list of states with the most cadets passing out ,others are as under

Interestingly, there was not even a single representation from Arunachal Pradesh, Mizoram and Pondicherry, while one cadet each was from Gujarat, Meghalaya, Nagaland and Tripura.
The newly formed state of Telangana had seven officers, while 12 cadets each were from Himachal Pradesh, West Bengal and Tamil Nadu, and 16 from Jammu and Kashmir.Karnataka and Jharkhand had 11 and seven cadets, respectively. The eastern states of Manipur and Assam had eight and five officers, respectively.
Meanwhile, Chandigarh and Odisha had three and two cadets, respectively.

The Sword of Honour and Bronze Medal was awarded to AUO Lalit Thapiyal (Dehradoon,UK)who was adjudged as the Best All-Round Cadet during the training.
AUO Abhishek Singh(Sambhal,UP) Chief of Army Staff Gold Medal for the first position in the course
BUO Ravi Somanagouda Mukimani was given Silver Medal for the second position.

For most of the cadets, Infantry and Artillery remain the choice of service with 117 and 87 cadets respectively being absorbed into these branches

Educational Qualification: Candidates should have passed 10+2 Examination or its equivalent with a minimum aggregate of 70% marks in Physics, Chemistry & Mathematics from a recognized education board.

Selection Process: Candidates will be selected based on cutoff % as decided by the Rtg Dte & Services Selection Board (SSB) Interview.

Grant of Commission: On successful completion of total 04 years training, the candidates will be commissioned in the rank of Lt. They will be granted seniority on overall order of merit of the three technical institutes combined i.e. CME, MCTE, MCEME and in case the date of commissioning coincides with that of IMA, Dehradun, they will be placed en-block junior to IMA (NDA/ ACC / DE Course ) but above TGC / UES course.
Eligible Male Candidates may apply online through the website www.joinindianarmy.nic.in from 20-10-2015 at 1000 Hrs to 30-11-2015 at 1000 Hrs.

Click here to apply Online
Posted by SNC at 09:39 No comments:

IMA Passing Out Parade June 2015: 616 Cadets Inducted Into The Indian Army As Officers

A total of 616 cadets were inducted into the Indian army as officers in Uttarakhand's capital city Dehradun after a passing-out parade at the prestigious Indian Military Academy. 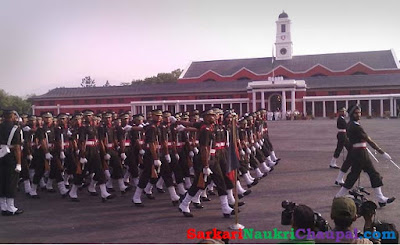 The Indian Military Academy held its 136th Regular Course passing out parade in Dehradun on Saturday.Hundreds of civilians and armymen gathered to witness the spring term passing out parade (POP) of the Indian Military Academy (IMA) in front of the famous magnificent Chetwode building under a blue summer sky, Decked up in army uniforms, 687 gentlemen cadets (GCs) took the "final step" and marched with discipline and perfect synchronization .687 Gentlemen cadets including 71 foreign cadets from 11 friendly nations - 44 from Afghanistan, 12 from Tazakistan, four from Bhutan, one each from Maldives, Lesotho, Fiji, Kazakhstan, two from Seychelles, Nigeria and Tanzania - joined the passing out brigade at the drill square.

The Chief of Naval Staff Admiral RK Dhowan was the Reviewing Officer at the Parade.He reviewed the parade as the GCs marched with pride and elan. While congratulating the newly-commissioned officers on successful completion of their training at IMA, Dhowan said, "IMA is a unique institute and valour and wisdom have always been its motto. The young cadets should remember that the word 'impossible' should never exist in their dictionary and they should serve the nation fearlessly with pride in their hearts." The naval chief added, "Commitment, courage, compassion, credibility and integrity, if followed, will pave a strong future for these young gentleman cadets." The reviewing officer also emphasized upon the need to remain updated on contemporary and futuristic strategies, tactics, weapon systems and equipment and urged cadets to equip themselves with the required personal, social, psychological and intellectual traits to meet the ever-evolving security challenges of the country. 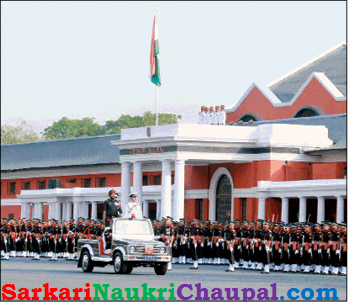 Also present were anxious parents, wardens and guardians who witnessed this memorable moment in the life of every cadet as they crossed the Chetwood threshold to become officers of the Army.
It was a memorable day for young officers as well as the culmination of hard work, determination and training eventually saw their dream come true.
After the POP, the piping ceremony (in which parents remove the shoulder flaps to commission the cadets as officers) was held and the celebrations ended with the newly-commissioned officers taking an oath to safeguard the nation at all costs and excitedly doing push-ups on the ground and wishing each other.
Keeping alive the glorious tradition of producing excellent officers, the Indian Military Academy Dehradun stands tall as one of the premier institutes in the world today.

71 Foreign Cadets, passed out from the Indian Military Academy, Dehradun

With 100 cadets commissioned as officers into the Indian Army, Uttar Pradesh tops the list of states with the most cadets passing out ,others are as under 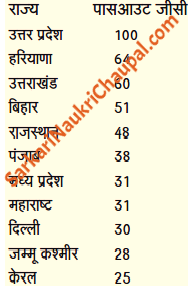 The Sword of Honour was awarded to ACA Ishan Singhal (Delhi) who was adjudged as the Best All-Round Cadet during the training. 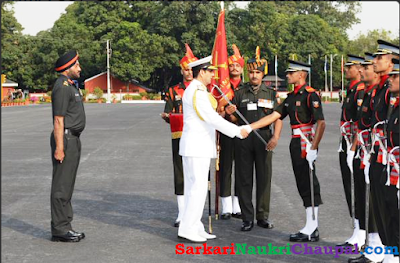 BUO Ajay Kumar Pathak (Amethi,UP)) was awarded a gold medal for the first position in the course 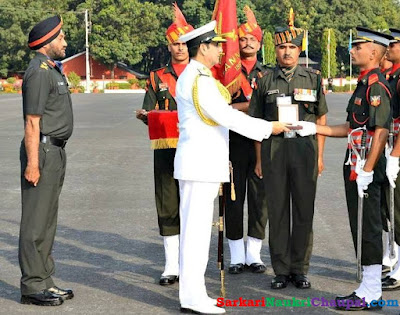 SUO Ashsish Kapoor (Kukshetra,Haryana) was given silver for the second position 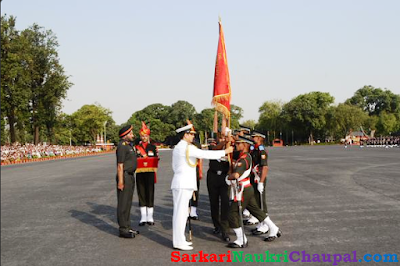 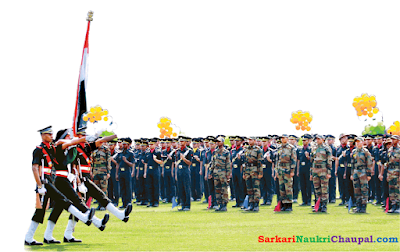 The parade also witnessed a drizzle but it failed to affect the enthusiastic atmosphere at the academy. 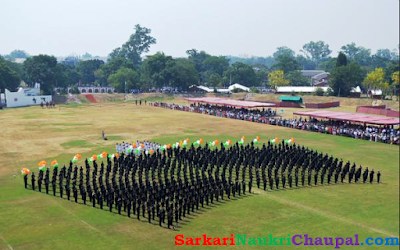